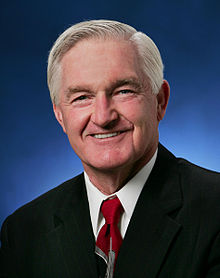 Bob Robbins was born on August 27, 1944 and brought up in Pennsylvania itself – the North western region of Greenville. Post his schooling from Greenville High School, he joined the United States Military Academy at West Point. By the time he left army, after serving two tours in Vietnam, he was ranked as a Captain. He again returned to Greenville, and became a teacher and wrestling coach at his alma mater Greenville High School. Additionally, he also worked as an Insurance Agent. His wife is Cynthia A. Robbins.

His first major political victory came in 1982 when he won an election as a Republican to a Mercer County-based seat in Pennsylvania House of Representatives – His home state. As Roy Wilt, who was the incumbent member of Senate in the 1990, decided to retire from active politics, Robbins ran for the elections. He contested for the state Senate and despite the district’s conservative character, Bob Robbins happened to face a strong challenge. Charles W. Flynn, Meadville city councilman, in association with Bob Casey, who was a very popular Governor, wanted to dismantle the plans of Bob Robbins, but Bob Robbins prevailed. It was that day and today, and since then Robbins has faced little opposition, nothing too serious at least. In 2014, Robbins decided to not run for the re-election to the Senate.

What followed was the Journey of Robbins rising through the ranks of Senate Republicans. He became Majority Caucus secretary eventually. Almost a decade back, in 2006, he was the only member of the Senate Leadership who was re-elected after Voter Anger. The 2005 Legislative pay raise at that time had proved to be fatal to the positions of several members of the leadership. Even the Senate President Robert Jubelirer and Senate Majority Leader David J. Brightbill had succumbed to the situations.

In 2009 he served on the following committees – Agriculture & Rural affairs, Chairman of Game & Fisheries, Vice Chairman of Local Government, Rules & Executive Nominations, Veterans Affairs and Emergency Preparedness. The same continued in the 2011-12 legislative session as well.

Over the years, he has had a long list of campaign donations. An estimated amount of $1322173 has been raised by Bob Robbins till September 2013. During the 2006 election cycle, he had raised $535698. The major donors were Senate Republican Campaign Committee of Pennsylvania, Pennsylvania Republican Party, Republican State Committee and small companies like Fair Credit. He had defeated Art Allen from the Democrats in that election. The votes tally had been 41302 to 35854 in the favour of Robbins. In 2010, Bob Robbins won the re-election. During this particular campaign, he had raised a total of $164171. In this particular election, his direct competitor was Roberta Biros (Independent). The vote difference had exaggerated now to 59267 to 13211 votes in the favour of Robbins. In 2012 though he was not up for the election he still raised around $65000.

In December 2013, after a career than spawned across Army and Politics, with 32 years of public service in the state legislature, Senator Bob Robbins finally announced that he will retire at the end of his on-going term. Content with his achievements and services offered through his career, he said he was now looking forward to spend more time with his family post retirement.

Giving a look at all the work he has done while being at the helm of various posts, one can easily identify that his achievements speak volumes about him. He was the force behind the establishment of the National Guard’s Educational Assistance Program. He was also honoured as the first inductee of the Army National Guard Hall of Fame. Charles Dick Medal of Merit, the so-called Nobel Prize for the exceptional contributions to the National Guard, was conferred upon him in 2001. He also received induction in the Air National Guard of Fame.

Under his leadership, various other programs were launched and initiated as well. The 50th District finally had a successful Land Recycling Program known as Brownfields Legislation. This returned the unproductive and waste industrial sites to the older of ways of being productive and job creating workplaces. A local economic development incentive program like the Keystone Opportunity Zone was also launched under the reign of Bob Robbins.

Being from Army, he also accomplished the Mentored Youth Program. His leadership position at Majority Caucus Secretary earned him a huge respect as well. Even after all these achievements, as is said about an individual, his humility has always found a way out to be strikingly visible to all of us. He very firmly asserted during his declaration of retirement he would not have accomplished all the laurels that he has, if it was without the support of his staff. Other than the staff, the family man Bob Robbins promptly reiterates the importance of his wife Cindy’s support, throughout all these years. He believes that even though he has announced his retirement, his actions as a resident of the United States, would still continue to make Pennsylvania a better place.